Language learning is an everyday Everest. As someone who has struggled to pick up a second language despite living in the country where said language is regularly spoken (albeit it in a thousand different dialects!), I am in awe of any person who picks up multiple languages, seemingly on the fly.

Christine Gilbert’s travel and language memoir, Mother Tongue, takes this concept to the extreme. The book is a fascinating combination of conceptual living, research project and wild family travel experiment. Gilbert has been a successful blogger, documentary film maker and world-traveller since 2009. Her blog almostfearless.com has depicted her travels since the beginning. This book, however, has been years in the making – I was dying to read it as an insight into language learning and travelling with a young family.

When my pre-ordered, beautiful hardcover copy arrived, I devoured it in under 3 days. This is a book that will resonate with anyone who’s struggled to live overseas and learn a foreign language. 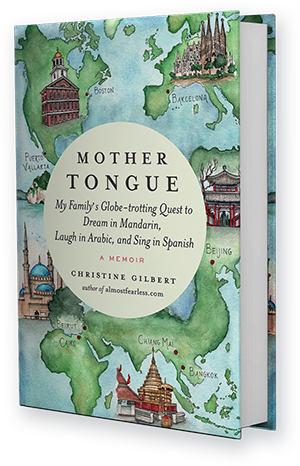 How did Mother Tongue come about?

Early on in her travels, after the birth of her son Cole, Gilbert came across a New York Times article connecting bilingualism with resistance to Alzheimers, as proven by the scientist Ellen Bialystok. The study proved that children raised bilingual can stave off the effects of dementia by 4-5 years. With a history of dementia in her family, this one concept  set the challenge that the book is based around.

The plan was ‘We’d move abroad. Somewhere with a tough language, one that Cole would really only be able to master if he lived there from toddlerhood. And I’d learn it too, so I could speak to him in the language at home.’

From this seemingly simple idea, Gilbert weaves a narrative of throwing herself into studying Mandarin, Arabic and Spanish. Her husband and two-year-old son move with her to Beijing in the winter, to immerse themselves in Mandarin, a complex tonal language. They spend a summer in Beirut conquering Arabic and adapting to a culture living on the cusp of violence daily. Their daughter is born in Mexico, as they embrace Spanish language and lifestyle.

What’s it really about?

Naturally, Gilbert’s choice to learn not one, but three languages – two of which don’t even involve English LETTERS – put my whingeing and difficulties about learning German to shame. But after the initial ‘How the hell does she do that?!’ moments,  Gilbert’s writing lures you into the adventure of truly committing yourself to an idea. I was in awe of the sheer ballsiness of saying ‘We will move to Beijing to learn Chinese, then Beirut for Arabic and then Spanish in Mexico’. I cannot imagine having the chutzpah to throw myself into something so entirely and completely for a creative project. It’s a testament to her dedication and her families adaptability that they survive their struggles.

Because yes, it is a struggle – you need to read the book to find out how and why, but any expat who’s been thrown into an unknown country, feeling alone and confused will shiver in recognition throughout this book.

The truly useful thing about Mother Tounge is Gilbert’s meticulous research into the learning techniques that do and don’t work when studying a language. She weaves her discoveries and lessons within an engaging and at times, startlingly honest narrative. It’s a heavily researched and analysed deep-dive into the techniques that do and don’t work, depending on your learning styles. I found it almost a relief to learn that the modern-day classroom style of drilling grammar isn’t nearly as useful as immersing yourself 100% into conversation and everyday living – with absolutely no breaks for English. (I’m on the verge of banishing myself to the countryside purely for the sake of my Deutsch.)

Beyond the educational value (and I learned a lot about the science of bilingualism, and when is the optimal age for children to be picking up languages) this is also a travel narrative that will entice you to new destinations. Never in a million years would I have thought to visit Beirut as a travel destination, but Gilbert’s descriptions of their home and local food had me adding it to the list of ‘must-sees’. (That list is longer than my leg by now, for those keeping score at home!)

‘Beirut seemed…alive, growing, green and scented with oranges and flowers. We loved it immediately. In Gemmyze we found a French-style bistro that served chilled rose at sidewalk tables. The sun was setting and the street had a pink glow. A mix of Arabic and French floated above the post-work crowd at the cafe’

‘The house was perfect. It was shaded by a canopy of flowering trees. From the roof we could stretch our arms out and touch the tops of banana and orange trees with the tips of our fingers. There were deep red blossoms spilling over onto the stairwell. The small courtyard below was a small jungle of a garden with broad-leafed plants, cream coloured roses and the beginning of a veggie patch’

How irresistible does that sound?

Who is it for?

This book is for anyone adapting to a new culture – particularly if you have, or plan on eventually having, a young family. I found the comparison of her son’s US birth to her daughters birth in Mexico particularly fascinating to compare side by side.

It’s also for the wanderlusters in all of us – if you are interested in more than just ticking tourist sights off a list, this book will push you to see beyond a city’s reputation and consider the culture, history and soul of a place. When you travel, Gilbert illuminates how much cultural exchanges matter.

What I appreciated most in this book was the admissions of struggle and failure throughout the ‘grand project’. Gilbert doesn’t shy away from admitting mistakes, difficulties and the threats they posed to her marriage and home life. It’s refreshing to read a memoir by a successful artist with the guts to say ‘I approached this entirely wrong’ or ‘this was a terrible idea’. It made everything within the book that touch more human, and a hell of a lot less intimidating.

Highly recommend for summer reading – and I’m not the only one! National Geographic added it to their list of summer reads as did Fodor’s. You can order it online with Amazon or just get it straight onto your kindle. BUT the artwork on the cover is so gorgeous you would really be missing out if you did – so embrace your inner book-lover and go the hardcover!

Have you read any fantastic expat or travel memoirs lately? Let me know in the comments!

P.S If you are looking for some good reads more regularly in your life, be sure to sign up here for my monthly round-up of the best of the web and book recommendations, so we can all nerd out together 🙂

20shares
Cookies are used on this website to give you the best experience possible. By continuing to use this site we trust that you are happy with that.Ok