I felt like kind of an ass this weekend. In the middle of Europe’s biggest refugee crisis, amongst thousands of displaced Syrians, Afghans, Iranians and other victims of ISIS and drawn out warfare, I had a girlie weekend getaway to Budapest. Budapest is currently sitting front and centre as the crossover point for refugees making the hard journey from Syria, overland through Greece or Turkey to arrive on the EU borders in Hungary, desperate for passage to Germany and Sweden and seeking safety and support.

We’d planned the weekend for months – a girlie getaway for a friends 30th – in an easy to access city that the others had never been to. Budapest was perfect because there are cheap flights from London, and from Vienna the train ride is just 2 hours direct. Of course, what I couldn’t know as we booked is that I’d be arriving at Keleti station to a makeshift refugee camp and sharing my train rides with hundreds of refugees clamouring for safety after the uncertainty of their journey and a horrific experience over the past week in Hungary.

It was quite the weekend. 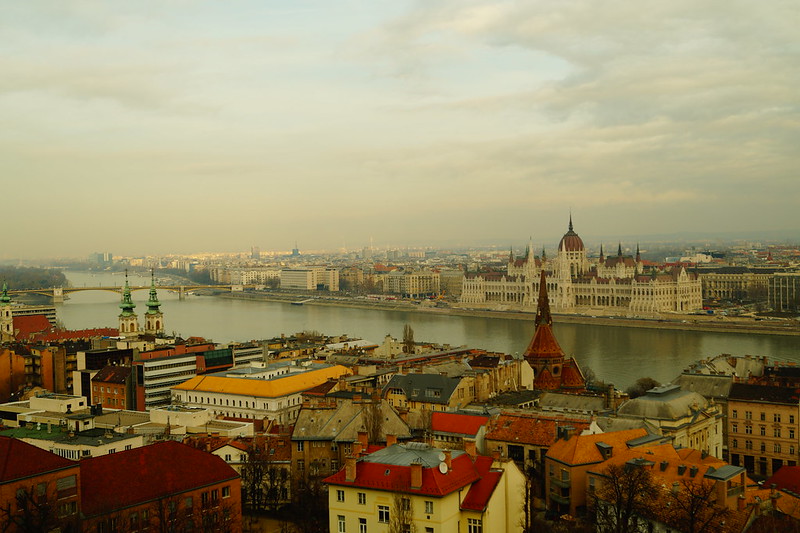 I’ll have a post up shortly about Budapest as a Weekend Getaway destination, but today, now, I had to share what I saw first hand, what they told me, and what it’s really like to be a part of that crowd, even for a few short hours. Not to stroke my ego, or engage in a perverse exploitation of suffering, but to show the human side of things, behind the headlines and Facebook status’ and overshared photos and Government debates.

Budapest – Vienna train, Sunday 6th August There’s a father trying to get to Stuttgart to stay with a friend, so he can work enough to bring his son and wife across from Syria. He spoke about the awful treatment that he’d received in Budapest by the authorities. No food supplies, or only old dried bread when there was food. When he tried to purchase and pay for a Coke or food from a cafe he was forcibly removed, despite his ability and willingness to pay. The days in Keleti had worn everyone down, he said, but arriving in Austria to receive Banana’s and water was a drastic improvement and morale booster. There’s an Iraqi family of 3, the boisterous father and the quieter but friendly son and daughter around my age, who joined our train in Györ on the trip back to Vienna. The father was chatty despite the language barriers, and the daughter shared her stash of chocolate around our small cabin, refusing to take no for an answer. They are trying to get to Sweden. The father is still in shorts, but the weather is catching up to us by the time we arrive in Vienna.   There’s a heartbreakingly beautiful girl, aged about 6, walking up and down the train aisles with her mother – as she passes others clear a path, reaching hands to help out and ensure she doesn’t hit her head or run off too fast amongst the crowd. The sense of community here is innate, and in the enclosed space of the train feels almost jovial despite the situation. A quiet determination after so many weeks of travel.     There’s a group of 6 to 8 men, who defer to the Boisterous Iranian in conversation and banter amongst themselves to decipher notification texts when we cross the border from Hungary into Austria. Two younger guys fist bump when they pass each other, and I could swear we are on a regularly overcrowded train on an average summer Sunday, with no greater cares in the world.

Very much at a loss of words here. Civil society and humanity at its best! #Westbahnhof #refugeeswelcome #vienna pic.twitter.com/NcI7DffWUr — Christoph Derndorfer (@random_musings) September 5, 2015

There’s hundreds of others on the train with us – and arriving into Westbahnhof we’re greeted with cheers and support. It’s a beautiful outpouring by the local Austrians, matched only by the number of cameras and media to meet us. The weird thing is, after the long ride, it doesn’t feel like I’m surrounded by Refugees with a capital ‘R’. I’m surrounded by people that needed wifi to check Facebook to tell friends they are safe, by people who studied at university and were lucky enough they had the money available to escape Syria, by guys who can still joke amongst each other.  People exactly like my friends.

Our train was stopped at Hegyshalom, right on the border between Austria and Hungary, with Slovakia just a stone’s throw away. The young guy sitting opposite me in the carriage nonchalantly grabbed a water bottle from the pallet clearly laid out for arriving refugees as we switched platforms. The old weathered Hungarian train driver watching us shift was completely still in the sunset silhouette, impervious to the confusion, the police squad roaming the platform, the bouncy friendliness of the ÖBB staff directing us. It was the last time we would have assistance on the confused journey – once inside Hungary, information became scarce and garbled between translations and ever-changing directions.

We filed into the empty waiting carriages of a domestic Hungarian train, waiting and watching. The Austrian rail service would go no further – their trains aren’t entering Keleti station. We waited for the Bratislava connection to arrive and fill the aisles with other pampered passengers heading in to Budapest. Italian, American, an unashamedly loud Kiwi couple, Taiwanese, Korean, all equally confused but calm. We clutched iPhones, read books, stared a little too long at the Syrian looking passengers. ‘Are they? Aren’t they? Should I offer to help? Are they headed back to Budapest to fetch their family? Or am I judging to quickly, are they only tourists too?’

The Taiwanese couple left the train in seeming confusion at the unexpected change from their carefully printed-out itinerary. A British man claimed his rucksack ‘disappeared’ in the switch between trains and questioned each passenger with similarly nondescript black rucksacks.

They weren’t quite this hardcore looking – but close

The train grinds into movement and we’re off to Györ where we will change once again before getting to the now infamous Keleti main station. Our arrival time is pushed back by an hour, then two and eventually becomes irrelevant. A mild inconvenience for some, and unavoidable issue for others. With all the reports of disruption across the news no one can really be surprised at this.

We came into Keleti station under cover of darkness, and it was eerily quiet and deserted. I’d come this way before, arriving to open storefronts, bustling international trains and noise, high arched rooftops and the sense of 19th Century Romantic Europe. From the arrivals side, the station itself was unchanged, but instead of crowds of tourists and bustling activity, the station was quiet, subdued, storefronts shuttered and police lining the entrance hall. Some were chatty and helpful, others were stone faced and ignored the confusion of arriving tourists. 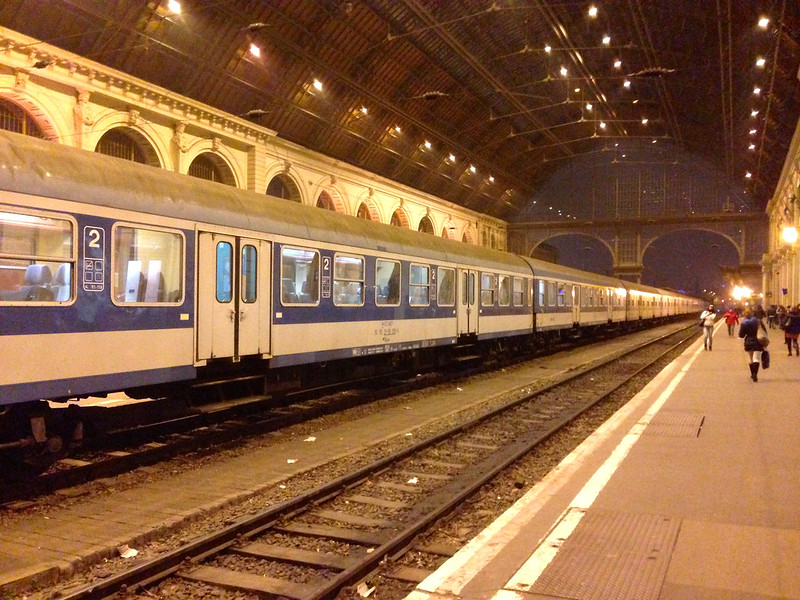 Photo credit Andy Nash via Flickr. I was not focussed on photography at this point!

I approached the main entrance of the station – if I was going to be caught up in a small slice of the chaos, I may as well throw myself right in – and besides, the metro access signs were pointing that way. Tentatively I stepped outside, asking the Police Guards directions to the metro. What I saw in the courtyard entrance to the station was not chaos, or violence or rage, but a crowd of people chanting, moving around, holding signs in Arabic and gathering to share food, water bottles and try to glean more information from each other. It was, if anything, calm, with more media on the stairwell than genuine refugees.

The Hungarian guard at the station door ignored my question entirely – but a lovely guy from Afghanistan overheard me and gave directions to walk down the stairs to the underpass, and take a left to reach the Metro entrance. I took a deep breath, and headed down the stairs, into the heart of Keleti stations makeshift camp. There were families, kids, blankets and noise everywhere. Small plots of ground staked out by family groups, spread with what cardboard and warm blankets could be found. Close packed, but navigable. I followed the lightly marked paths, hopping between families, dodging volunteers who arrived briefly to deliver necessary water and were immediately surrounded by the faster moving young men.

The biggest shock was the number of children – it seemed like a large, messy, horrible picnic from the amount of kids running around. There were people that could have been media, but also could have been ‘tragedy tourists’, getting their cameras up close to childrens faces. Unashamedly taking quick snap photos of the wide expanse of people milling and moving about the underground. I couldn’t bear to take out a phone or camera in the face of it – so many regular people, so clearly distressed and not here by choice, it seemed a violation to capture their upset faces and state of discomfort. 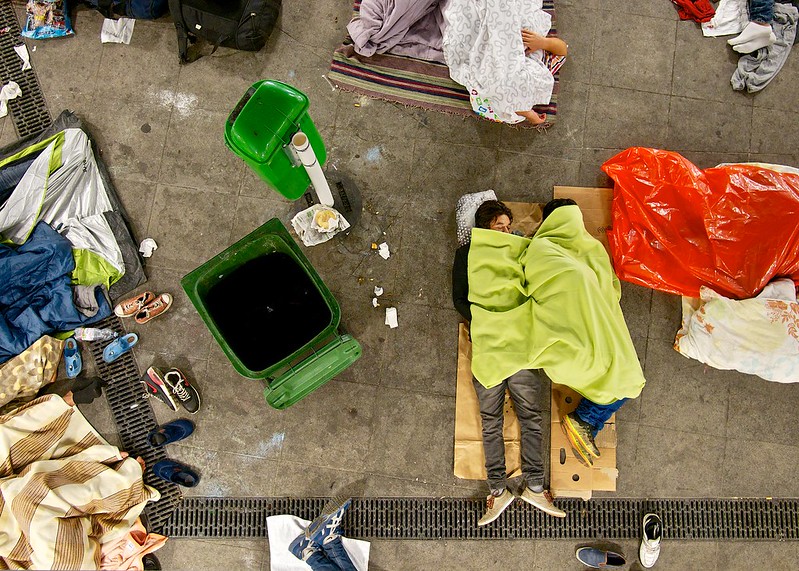 So I walked on through, offering what little I had – smiles, water, a few little snacks, and although they probably couldn’t tell, all of my heartfelt hope that they would be able to leave there soon.

I turned a corner as my Afghan mate had directed, and beyond the boundary of the underpass and into the Metro it was completely empty, clean and quiet. It was like stepping over an invisible border, from one world to another. I was then promptly scammed by a ticket inspector at the station, as I forgot to check my change in my distress and left the equivalent of €40 when paying for a €2 ticket. Hungary was proving to be more difficult than ever, despite my love for the city and the people.

70shares
Cookies are used on this website to give you the best experience possible. By continuing to use this site we trust that you are happy with that.Ok