He grabbed my hand as I was striding to the dance floor. After six weeks in a ski resort with the girl-to-guy odds strongly in my favour, I was confident, even cocky, as he pulled me aside. He had an Irish lilt to his accent and a cheeky open smile.

‘Sure, I’ll have a drink, what are you buying?’

The drink came with complicated instructions, the most important of which was:

‘If you get scared, just close your mouth and the fire will stop’

Still far too confident for my own good, I nodded flippantly and assured this charming guy I could handle it. With a quick flick of the wrist I took the shot glass in hand and poured the sambucca into my upturned mouth like a baby bird. Then I leant back for the lighter to be lowered into my mouth, setting the waiting sambucca aflame. It was only when he started to sprinkle the cinnamon and sparks began not only flying, but dropping past my eyeballs that I lost my cool. All memory of the carefully repeated instructions forgotten, I panicked. My head flew up, eyes wide. In less than half a second I’d spat the flaming shot back out. Not gracefully to the floor, but straight back onto him – the flaming spirit hit his neck, his sharply ironed shirt and Timberland shoes. After a millisecond of stunned silence, we both collapsed into laughter, covered in sticky sweet sambucca.

Eight months later we were standing in a Viennese Magistrat’s office with our freshly signed marriage certificate. We never planned on getting married so fast, and I never imagined I would marry the man I loved for a Visa.

One of the few photos from the first week we met

We Got Married for A Visa

We got married for a visa, and it was tough. It was also wildly romantic – but it’s only looking back that I appreciate that.

I don’t regret the decision for a second. What I do regret is that I never asked for help. Never tried to find other Expat couples who had been through a similar experience and could’ve given some perspective and reassurance. Getting ‘Visa Married’ was the most momentous, crazy, stressful, wonderful decision I’ve made, but we were completely alone in it.

At the time we thought we were insane idiots. In the 3 years since that day, I’ve discovered there’s many more couples out there who have been through it. Sharing and hearing their stories made us feel less alone, less insane and more assured of our decision.

Today, on our 3 year ‘definitely-not-a-wedding’ anniversary I wanted to share the Good, the Bad, the Ugly and the Best parts of getting Married for a Visa. In the hope that it will help another ‘crazy’ expat couple to get through it.

Stefan and I were both extremely not-ready-to-marry. We’d spent very little time actually being in the same country/place/room together, let alone existing as a serious couple. The harsh reality was, Austria is extremely tough for migrants from Australia to get in to. So the marriage conversation came about very very early as a necessity to stay together. From our (definitely-not-legally-binding) experience there’s 3 ways to get a Visa to live and work here.

We ran around in circles for months to try and find alternatives to marriage. We even referred to getting married as ‘Plan Z’. As in, the very final, absolute last resort of all our options. Could I get a German Working Holiday Visa but live in Vienna? Could his company sponsor me? Could we bribe the Visa office? We tried every other avenue from every possible side before the Plan Z conversation. Because to marry someone you just met and conducted most of your relationship with long distance, just seemed a touch too crazy. Surely?!?

As much as getting Visa-Married seemed insane, it put our relationship to the test extremely early. Without that early pressure I’m not sure if we would have persevered through other hurdles together. (Like his constant efforts to get me hiking). Once the stakes were set that high, we both knew it was make or break. From then on, we had to be as honest as possible with each other.

For a while it felt like it was us against the world. Fighting the government, the EU, the Schengen agreements – fighting just for the right to stay together. That early pressure-test survival set the groundwork for our relationship to withstand anything. We were a team. If we could get through the red tape and bureaucracy of Austria to stay together, we could do anything.

TL:DR: It will make your relationship stronger!

If you are an Australian or US citizen, you technically only have 90 days to stay in the Schengen zone of Europe within a 180 day period. If you don’t get a visa before that 90 day period runs out, you will be kicked out of Austria. I know this because it happened to me.  There is nothing more terrifyingly confusing than sitting in a 1970’s communist office building, while a formal looking Austrian woman shakes her head, repeats the word ‘nein’ and explains in rapid-fire German why you need to leave the country, immediately. At that point I’d known Stefan a grand total of 3 weeks and was being banished for 3 months to the UK. It was a gut-wrenching reality hit in the fairytale early days of our relationship.  Throughout our whole Visa application process the memory of that powerless moment hung over us like a ticking time bomb. Even after we were married, the 90 days still applied until my Visa was issued.

So the bad news is – it is literally a race against time once you are married to achieve legal status. Get your paperwork in order as early as possible!

Telling your close friends and family that you’re marrying a guy you met in a bar, that they’ve never met and oh, by the way, it wasn’t a ‘real’ wedding, just a paper signing, is horrific. The emotional fallout and reverberations, explanations, judgements and arguments went on for a minimum of 18 months. Having spoken with other couples, I’m told we were not alone in the gamut of reactions we received when we shared the ‘good’ news.

You will get a lot of this face.

Brace yourself for a full range of reactions – some people will say it was selfish, some will cry, others will be hurt you didn’t invite them (even when you assure them no one was invited). The good reactions will be like a lifeline of hope – those people who will simply see how happy you are and be happy for you. Know in advance that other people’s reactions to the news generally has more to do with what’s happening in their lives. Your sudden marriage is just a catalyst for their response. Eventually – and it will feel like an eternity where you’re world is collapsing but I promise, eventually – they will come around.

We intentionally made ‘Plan Z’ as low key as possible so it didn’t feel like a ‘real’ wedding, just some paperwork. He still wants to propose, I still want a beachside ceremony and of course we both want all our families there. So Plan Z was the absolute bare minimum, to convince ourselves it was just a paper signing. Just the two of us and our 2 witnesses – my best friend from London and his cousin from Tirol. No rings, no big dress, no music, no reception. It was 9:30am on a Monday, we took the tram in all together and had champagne breakfast in a non-descript cafe afterwards. 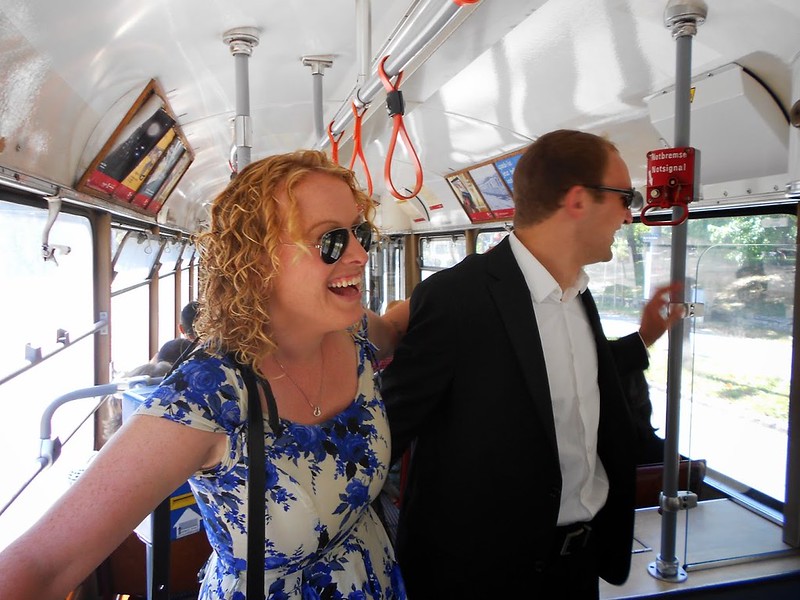 Just riding an old fashioned tram to our non-Wedding. No biggie here guys. (We were trying to play cool at this point)

Looking back, I’m so glad we kept it simple, as it is now forever a day that was truly just for us. The big party celebration will come and no doubt be incredible, but that day was truly ours.

I don’t have any wisdom to hand down here. It took me 3 years to work up the courage to even write about this. I’m still not sure about posting it. I needed the courage and the distance from the emotional fallout to get this far. What I do know is this:

Getting Married for a Visa isn’t wrong, or selfish, or bad or stupid. If you need to accelerate your relationship beyond ‘normal’ expectations for the sake of the relationship and it feels right, do it. In the immortal words of Billy Connelly ‘Fuck the Begrudgers’. It won’t be as scary and awful as you think!

I couldn’t resist making a whimsical travel quote out of this – sorry not sorry!

Partying in Apres ski bars, going on pub crawls and enjoying yourself, being your truest, happiest self pays off eventually. I met the love of my life in a bar after many many big nights, bad hookups and shenanigans galore. Never let anyone tell you not to enjoy yourself if it feels right to you. Find your real, happiest self, and the right cheeky silly person will be there waiting. That sounds like cheesy rom-com rubbish, but it happened to me – and I was a trashbag party queen with the best of them. And if a fun and friendly looking guy offers you a drink, take the chance and say yes. 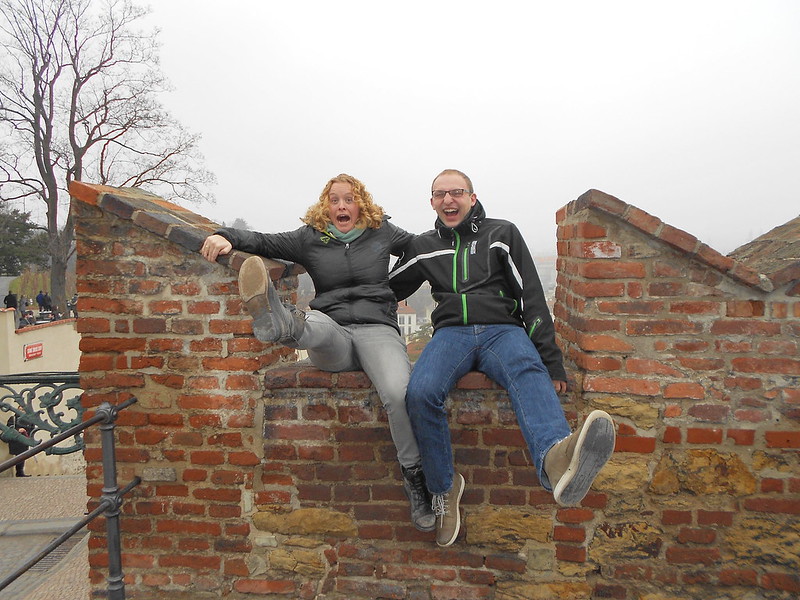 ….and it might just take you places you never imagined

We only went and bloody did it. With the help of s

Tell me Austria isn’t just a fairytale land and

Festive season in full swing and am already thinki

Small but mighty xmas market alert! Just down the

Load More…
479shares
Cookies are used on this website to give you the best experience possible. By continuing to use this site we trust that you are happy with that.Ok